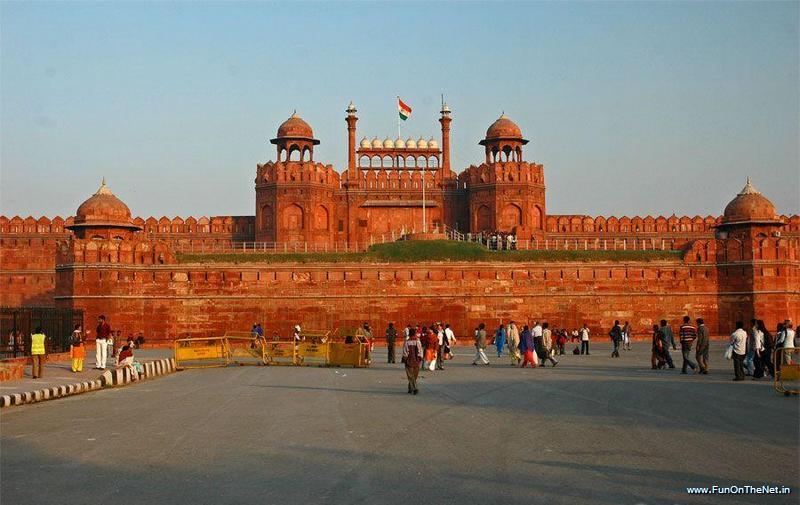 Red Fort.The Red Fort (Hindi: लाल क़िला, Urdu: لال قلعہ , usually transcribed into English as Lal Qil’ah or Lal Qila) is a 17th century fort complex constructed by the Mughal emperor Shahjahan in the walled city of Old Delhi . It served as the capital of the Mughals until 1857, when Mughal emperor Bahadur Shah Zafar was exiled by the British Indian government. The British used it as a military camp until India was made independent in 1947. It is now a popular tourist site, as well as a powerful symbol of India’s sovereignty: the Prime Minister of India raises the flag of India on the rampants of the Lahori Gate of the fort complex every year on Independence Day. It was designated a UNESCO World Heritage Site in 2007

The Red Fort was originally referred to as “Qila-i-Mubarak” (the blessed fort), because it was the residence of the royal family. The layout of the Red Fort was organised to retain and integrate this site with the Salimgarh Fort. The fortress palace was an important focal point of the medieval city of Shahjahanabad. The planning and aesthetics of the Red Fort represent the zenith of Mughal creativity which prevailed during the reign of Emperor Shah Jahan..The Red Fort is a tourist attraction from around the world.

The Red Fort was the palace for Mughal Emperor Shah Jahan’s new capital, Shahjahanabad, the seventh city in the Delhi site. He moved his capital here from Agra in a move designed to bring prestige to his reign, and to provide ample opportunity to apply his ambitious building schemes and interests.

The fort lies along the Yamuna River, which fed the moats that surround most of the wall. The wall at its north-eastern corner is adjacent to an older fort, the Salimgarh Fort, a defense built by Islam Shah Suri in 1546.The construction of the Red Fort began in 1638 and was completed by 1648.

. Red Fort, Delhi is one of the important building complexes of India which encapsulates a long period of Indian history and its arts. Its significance has transcended time and space. It is relevant as a symbol of architectural brilliance and power.

The walls of the fort are smoothly dressed, articulated by heavy string-courses along the upper section. They open at two major gates, the Delhi and the Lahore gates

Beyond this gate is another, larger open space, which originally served as the courtyard of the Diwan-i-Aam, the large pavilion for public imperial audiences with an ornate throne-balcony (jharokha) for the emperor. The columns were painted in gold and there was a gold and silver railing separating the throne from the public.

The Diwan-i-Khas is a pavilion clad completely in marble, the pillars decorated with floral carvings and inlay work with semi-precious stones.

The imperial private apartments lie behind the throne. The apartments consist of a row of pavilions that sits on a raised platform along the eastern edge of the fort, looking out onto the river Yamuna. The pavilions are connected by a continuous water channel, known as the Nahr-i-Behisht, or the “Stream of Paradise”, that runs through the centre of each pavilion

The two southernmost pavilions of the palace are zenanas, or women’s quarters: the Mumtaz Mahal (now a museum), and the larger, lavish Rang Mahal, which has been famous for its gilded, decorated ceiling and marble pool, fed by the Nahr-i-Behisht.

To the west of the hammam is the Moti Masjid, the Pearl Mosque. This was a later addition, built in 1659 as a private mosque for Aurangzeb, Shah Jahan’s successor. It is a small, three-domed mosque in carved white marble, with a three-arched screen which steps down to the courtyar

To its north lies a large formal garden, the Hayat Bakhsh Bagh, or “Life-Bestowing Garden”, which is cut through by two bisecting channels of water. A pavilion stands at either end of the north-south channel, and a third, built in 1842 by the last emperor, Bahadur Shah Zafar, stands at the centre of the pool where the two channels meet.