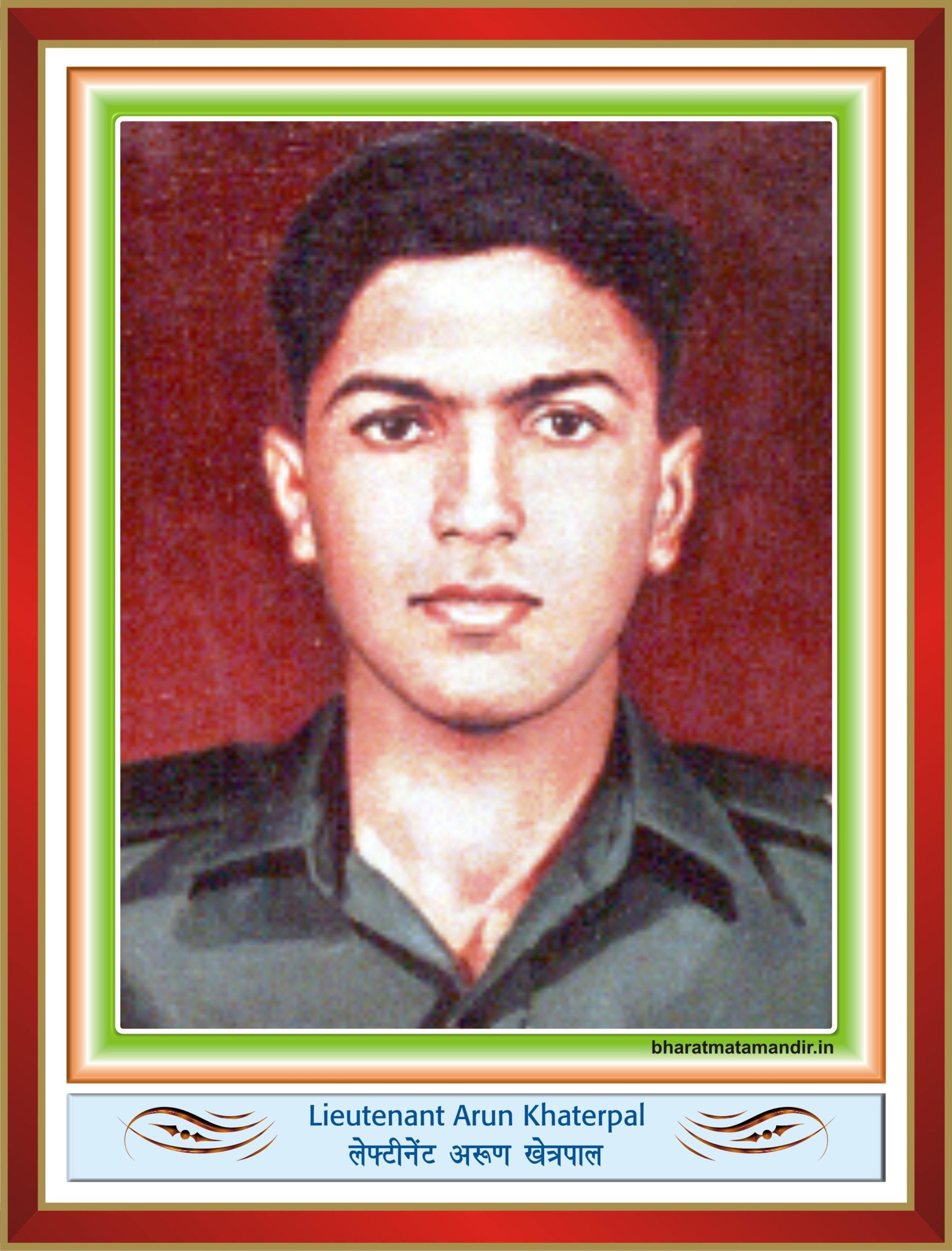 2nd Lieutenant Arun Khetarpal (14 October 1950 – 16 December 1971) born in Pune, Maharashtra, was an officer of the Indian Army and a posthumous recipient of the Param Vir Chakra, India’s highest military decoration for valour in face of the enemy. 2nd Lt Khetrapal fell in the Battle of Basantar or Battle of Barapind during the Bangladesh war where his actions earned him his honour.

Arun Khetarpal was born in Pune, Maharashtra on 14 October 1950. His father M.L. Khetarpal was at the time a Brigadier in the Indian Army and his family traced a long history of service. Attending the Lawrence School in Sanawar he distinguished himself both as an able student and sportsperson. Khetarpal joined the National Defence Academy in 1967 and subsequently went on to join the Indian Military Academy. In June 1971, Khetarpal was commissioned to the 17 Poona Horse.

During the Bangladesh war, the 17 Poona Horse was assigned to the command of the 47th Infantry Brigade of the Indian Army. Through the duration of the conflict, the 47th Brigade saw action in the Shakargarh sector in the Battle of Basantar.

Among the tasks set for the 47th Brigade was to establish a bridgehead across the River Basantar. By 2100hr of 15th of December, the brigade had captured its objectives. However, the place was extensively mined, which prevented the deployment of the tanks of the Poona horse, and the engineers clearing the mines were halfway through their tasks when Indian troops at the bridge-head reported alarming activity of the enemy armour, asking for immediate armour support. It was at this critical juncture that the 17 Poona Horse decided to push through the mine-field. The regiment was able to establishe a link-up between the armour and the infantry at the bridge-head by first light the next day.

At 0800hr on 16 December, Pakistani armour launched the first of their counter-attacks under the cover of a smokescreen at the pivot of the 17th Poona Horse at Jarpal against . Heavily outnumbered against Pakistani armour and infantry, the commander of the “B” Squadron called for urgent reinforcements. This call was taken up by 2nd Lieutenant Arun Khetarpal, stationed close to the squadron, with his detachment of two tanks and troops. Khetrapal wheeled to meet the Pakistani armour and launched right into the Pakistani attack. With his troop he was able to run over the enemy advance with his tanks and even captured some of the enemy infantry and weapon crews at gunpoint. However, the commander of the second tank was killed in this attack. Alone in charge, Khetrapal continued his attack on the enemy strongholds until he had overwhelmed the Pakistani positions Emboldened by the success he pursued the retreating Pakistani troops and artillery gunning down a Pakistani tank in the process. However Pakistani forces regrouped and counterattacked. In the ensuing tank battle ten enemy tanks were hit and destroyed of which Second Lieutenant Arun Khetarpal accounted for four.

The skirmish however took its toll on the Lieutenant as he was hit by enemy fire, but instead of abandoning the tank he fought on destroying one final tank before he was finally overwhelmed by Brigadier Khwaja Mohamad Naser. However, his actions had denied a vital breakthrough for Pakistani forces and instead put the Indians in a stronger position in the Shakargarh bulge. His final words over the radio to a superior officer who had ordered him to abandon his burning tank were, “No Sir, I will not abandon my tank. My gun is still working and I will get these bastards.” Then he set about destroying the remaining enemy tanks. The last enemy tank, which he shot, was barely 100 metres from his position. At this stage his tank received a second hit. The officer met his death denying the Pakistani Army the intended breakthrough. Khetarpal’s tank “Famagusta” was restored and is on display now.

For his conspicuous gallantry in the face of the enemy, 2nd Lt. Arun Khetarpal was honoured with the highest wartime gallantry medal, the Param Vir Chakra, posthumously. He is remembered for his bravery.HE managed to get his damaged tank to the brigade command tent, he was mortally injured and subsequently breathed his last.

Many years later, India and Pakistan established ‘people to people’ contacts between both the nations. This was also known as ‘Twin Track Diplomacy’.

In 2001, Brigadier M.L. Khetarpal – now 81 years old – felt a strong desire to visit his birthplace at Sargodha, now in Pakistan. It was a wish that he thought that would never materialize, but when he voiced it to some friends engaged in the Twin Track Diplomacy, they arranged all his papers, visas, travel and staying arrangements in Pakistan so that he could go for the visit.

Brigadier M.L. Khetarpal was overwhelmed by the extreme kindness, deference, courtesy and respect bestowed upon him by Brigadier Naser, all the members of his family and his many servants. As the countdown for the departure progressed, the bonds of friendship between the guests and the host grew stronger and stronger. However Brigadier Khetarpal felt that something was amiss but could not make out what it was. Was it the long silences that punctuated their animated conversation or was it the look of compassion in the eyes of the women in the family? He could not make out.

However, what was certain was that he would always remember the hospitality, warmth and affection of this Pakistani family who treated him as someone very special.

Finally, on the last night before Brigadier M.L. Khetarpal’s departure, Brigadier Naser said ‘Sir, there is something that I wanted to tell you for many years but I did not know how to get through to you. Finally, fate has intervened and sent you to me as an honoured guest. The last few days we have become close to one another and that has made my task even more difficult. It is regarding your son who is, of course, a national hero in India. However on that fateful day, your son and I were soldiers, unknown to one another, fighting for the respect and safety of our respective countries. I regret to tell you that your son died in my hands. Arun’s courage was exemplary and he moved his tank with fearless courage and daring, totally unconcerned about his safety. Tank casualties were very high till finally there were just two of us left facing one another. We both fired simultaneously. It was destined that I was to live and he was to die.

It is only later that I got to know how young he was and who he was. We are trained to fight and kill without mercy or remorse. We do in war what we have to without thinking too much about it. However we are humans too and sometimes war takes a personal turn and makes an impact on the inner self.

I had all along thought that I would ask your forgiveness, but in telling the story I realize that there is nothing to forgive. Instead I salute your son for what he did at such a young age and I salute you too, because I know how he grew into such a young man. In the end it is character and values that matter.”

Brigadier M.L. Khetarpal was silent as he did not know how to react. To be faced with the person who killed his son, and also to be enjoying his hospitality and being his guest is a confusing feeling. However, Brigadier M.L. Khetarpal immediately realized that Brigadier Naser was genuinely wanting, in some way to compensate for something that he did only in the line of duty. The soldier must do what he has been trained to do unhesitatingly, and with full resolve and determination.

Both the Brigadiers retired for the night deep in thought. There are never any victors in war; both sides lose and it is the families that have to pay the price and suffer the most. As someone once said ‘Wars are created by politicians, compounded by bureaucrats and fought by soldiers.’

The next day photographs were taken and Brigadier M.L. Khetarpal returned back to Delhi. Later the photos reached Delhi along with a note from Brigadier Naser that said:

“With Warmest regards and utmost sincerity, To: Brigadier M.L. Khetarpal, father of Shaheed Second Lieutenant Arun Khetarpal, PVC, who stood like an unsurmountable rock, between the victory and failure, of the counter attack by the ‘SPEARHEADS’ 13 LANCERS on 16 December 1971 in the battle of “Bara Pind’ as we call it and battle of “Basantar’ as 17 Poona Horse remembers. –Khawja Mohammad Naser, 13 Lancers, 2 March 2001, Lahore, Pakistan