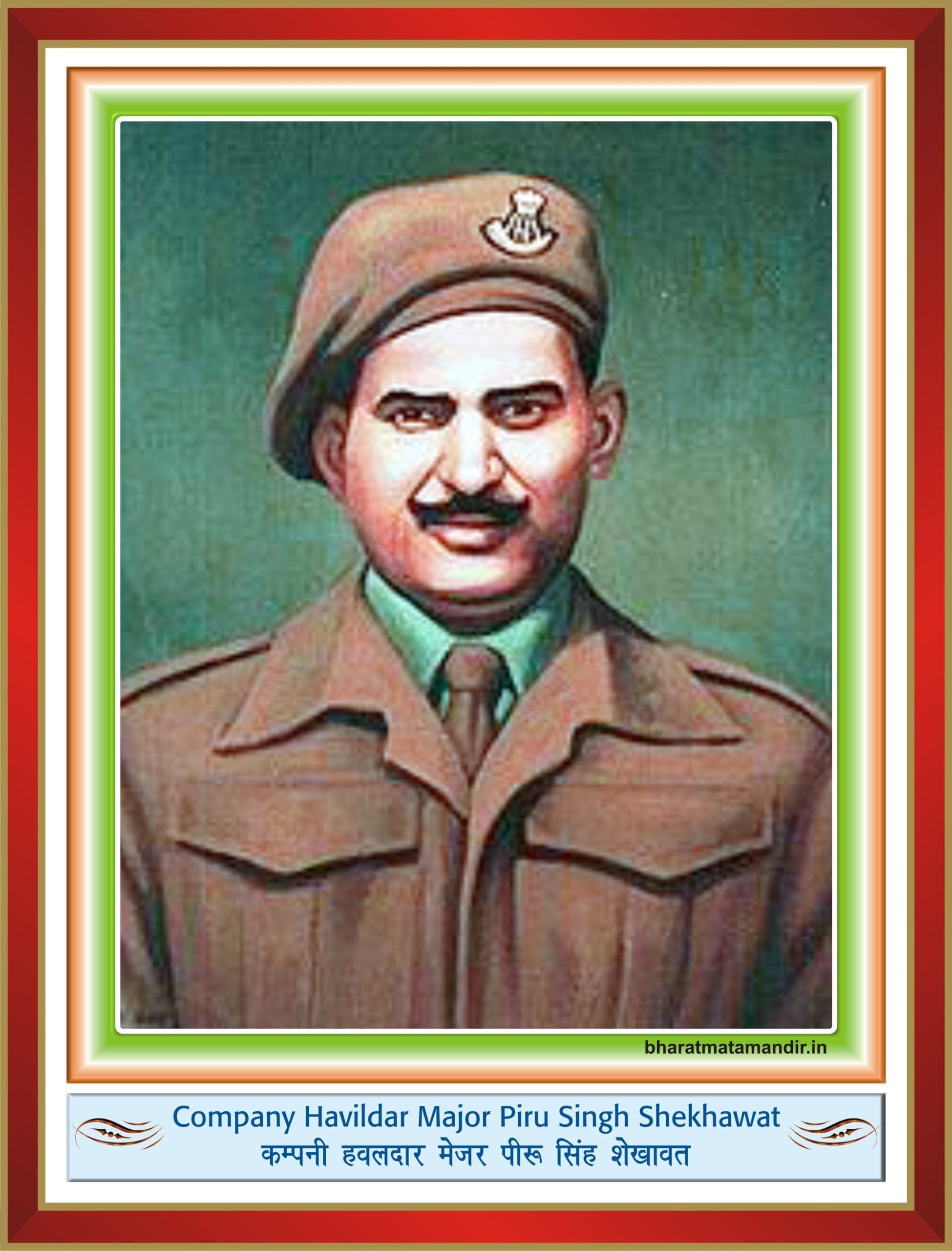 Company Havildar Major Piru Singh Shekhawat (born 20 May 1918, Rampura Beri- Churu Rajputana, India) was a soldier in the British Indian Army. He died in service during the Indo-Pakistani War of 1947. He was posthumously awarded the Param Vir Chakra, India’s highest award for valour in the face of the enemy.

Company Havildar was enrolled in the 6 Rajputana Rifles on 20 May 1936. During the Jammu & Kashmir operations in summer of 1948, Pakistani raiders mounted a strong counter offensive in the Tithwal sector. The enemy also forced the Indian Army to vacate their forward positions across river Kishanganga. After the setback, Indian troops took position on the Tithwal ridge. At this juncture, 6 Rajputana Rifles was moved from Uri to Tithwal to strengthen the 163 Bde in its impending offensive in the sector. The Indian offensive commenced on 11 July 1948. The operation went on well till July 15th. The reconnaissance reports, however, revealed that the enemy was holding a high feature in the area and that its capture was essential for making any further progress. Further ahead lay another feature also held in strength by the enemy.

The 6 Rajputana Rifles was assigned the task of securing these two features. The ‘D’ Company was to secure the first feature. The ‘C’ Company was to capture the second feature after the ‘D’ Company had carried out its task. The ‘D’ Company launched its attack on the objective at 0130 hrs on July 18th. The path to the objective was about one metre wide with deep ravines on either side. Overlooking this narrow path were the hidden enemy bunkers. The company was subjected to heavy fire and with half an hour it suffered 51 casualties. During this battle, CHM Piru Singh was with the leading section of the company, more than half of which was mowed down by the devastating fire of the enemy. He rushed forward to deal with the enemy medium machine gun post, which was playing havoc with his troops. Enemy grenade splinters ripped open his clothes and wounded several parts of his body. But this did not deter him. He still continued the advance, shouting the battle cry, “Raja Ramchandra Ki Jai”. Rushing forward he bayoneted the crew of the enemy MMG, with his own sten gun, silenced the menacing gun and occupied the post. By this time all his companions lay behind either dead or wounded.

The responsibility of clearing the enemy from the hill feature lay with him alone. Bleeding profusely he inched forward to attack the second enemy MMG post. At this juncture a grenade wounded him in the face. The blood dripping from his face almost blinded him. By now all the sten gun ammunition with him had been spent. He courageously crawled out of the occupied enemy trench and hurled grenades at the next enemy post. CHM Piru Singh then jumped into another trench and bayoneted two enemy soldiers to death. As CHM Piru Singh, emerged out of the second trench to charge on the third enemy bunker, he was hit in head by a bullet and was seen dropping on the edge of the enemy trench. There was an explosion in the trench, which showed that the grenade had done its work. By then CHM Piru Singh’s wound had proved fatal. “He paid with his life for his singularity brave act, but he left for the rest of his comrades a unique example of single-handed bravery and determined cold courage. The country is grateful,” wrote Prime Minister Jawaharlal Nehru to Mrs. Tarawati, 75-year old mother of Company Havildar Major Piru Singh, “for this sacrifice made in the service of the Motherland, and it is our prayer that this may give you some peace and solace.” Company Havildar Major Piru Singh was honoured with the highest wartime gallantry medal, Param Vir Chakra, posthumously.

“South of Tithwal, ‘D’ Company, of which No 2831592 Piru Singh, was Havildar Major was detailed to attack and capture an enemy occupied hill feature. The enemy had well dug in positions and had sited his MMGs so as to cover all possible approaches. As the attack advanced, it was met with heavy MMG fire from both flanks. Volleys of grenades were hurled down from enemy bunkers. Company Havildar Major Piru Singh was then with the forward most Section of the company.”

“Seeing more than half of the Section killed or wounded, he did not lose courage. With battle cries he encouraged the remaining men and rushed forward with great determination onto the nearest enemy MMG position. Grenade splinters ripping his clothes and wounding him at several places, he continued to advance without the least regard for his safety. He was on top of the MMG position wounding the gun crew with Sten gun fire. With complete disregard to his bleeding wounds he made a mad jump on the MMG crew bayoneting them to death, thus silencing the gun.

“By then he suddenly realized that he was the sole survivor of the section, the rest of them either dead or wounded. Another grenade thrown at him wounded him in the face. With blood dripping from his face wounds in his eyes, he crawled out of the trench, hurling grenades at the next enemy position.”

“With a loud battle cry, he jumped on the occupants of the next trench bayoneting two to death. The ‘C’ Company Commander who was directing fire in support of the attacking company witnessed this action.”

“As Havilder Major Piru Singh emerged out of the second trench to charge on the 3rd enemy bunker, he was hit in the head by a bullet and was seen dropping on the edge of the enemy trench. There was an explosion in the trench, which showed that his grenade had done its work. By then Company Havildar Major Piru Singh’s wounds had proved fatal.”

“He had paid with his life for his singularly brave act, but he had left for the rest of his comrades an unique example of single-handed bravery and determined cold courage.”