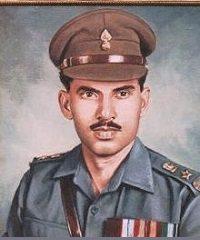 Major Hoshiar Singh (1936 – 1998) was born on 5 May 1936 in Sisana village, Rohtak district, Haryana to Choudhary Hira Singh. He served the Indian Army with dedication befitting his family and retired as Colonel. He died on 6 December 1998 of natural causes.

His father was a farmer and his mother Mathuri Devi, a housewife. Col Hoshiar Singh got married to Dhanno when he was still studying in the 7th standard. They had three sons. After his schooling and one year’s study at the Jat College, Rohtak, he joined the Indian Army as a soldier.

He was commissioned in the Grenadiers Regiment of the Indian Army on 30 June 1963.

His first assignment as an officer was in NEFA. In the 1965 Indo-Pakistan war, he saw some action in the Rajasthan sector.

During the Indo-Pakistani war of 1971, the 3rd battalion of the Grenadiers was given the task of establishing a bridgehead across the Basantar River in the Shakargarh Sector from 15 – 17 December 1971. The river was covered with deep minefields on both sides and protected by well-fortified defence by the Pakistani army. Major Hoshiar Singh, Commander of ‘C’ Company, was ordered to capture the Pakistani locality of Jarpal. The Pakistani army reacted and put in sharp counter attacks. Major Hoshiar Singh went from trench to trench, motivating his command and encouraging his men to stand fast and fight as a result his company repulsed all the attacks inflicting heavy casualties on the Pakistani army. Though seriously wounded, Major Hoshiar Singh refused to be evacuated till the ceasefire. Throughout this operation, Major Hoshiar Singh displayed most conspicuous gallantry, indomitable fighting spirit and leadership in the highest traditions of the Army. He was honoured with the highest Indian wartime gallantry medal, the Param Vir Chakra. He was also Mentioned-in-Despatches.