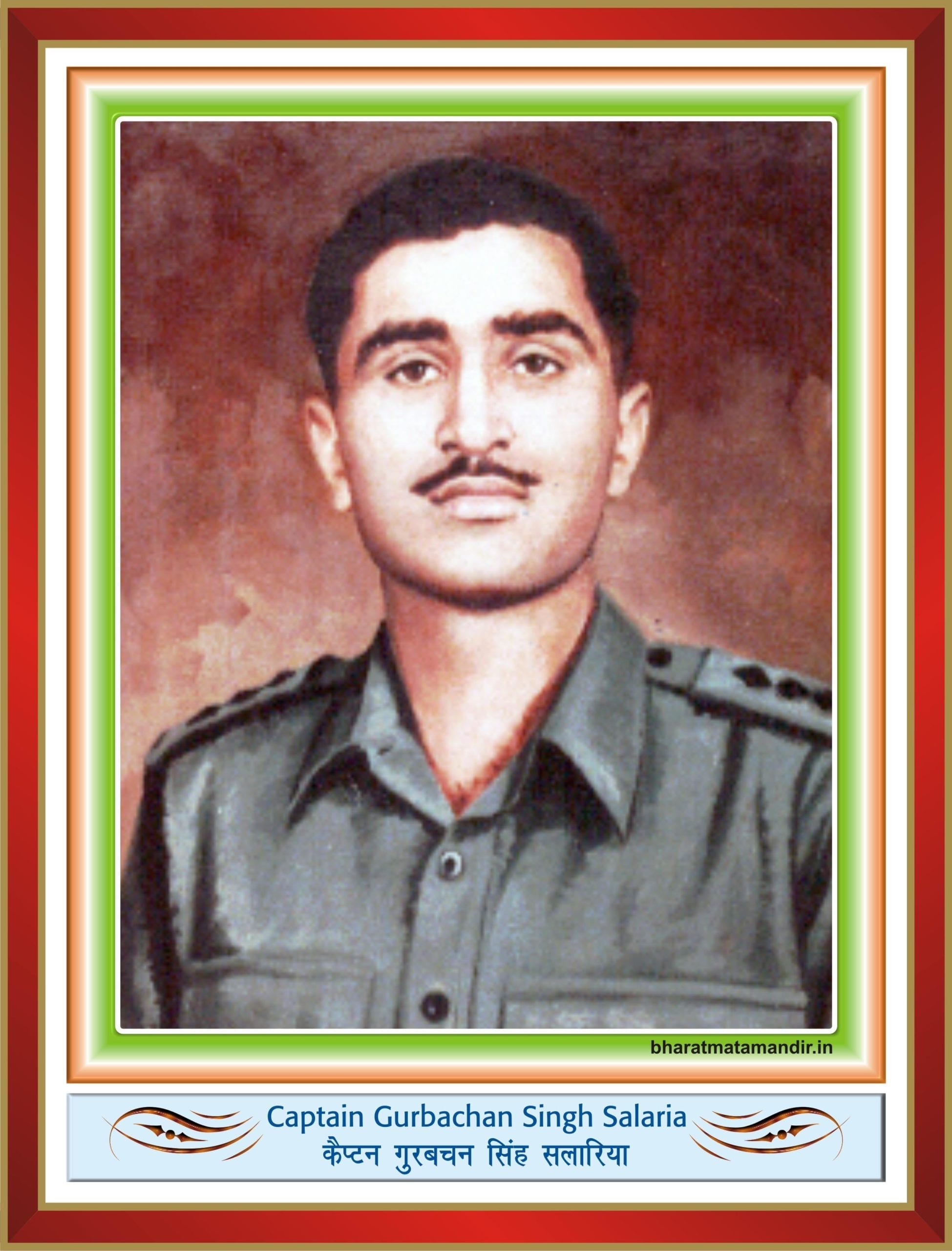 Gurbachan Singh Salaria was from village Jangla near Shakragarh in Gurdaspur, Punjab. He belonged to a farming family and his father’s name was Chaudhary Munshi Ram Salaria. He started his education at King George School, Jalandhar (now known as Military School, Chail) and joined the National Defence Academy at Khadakwasla. Commissioned in the 1st Gorkha Rifles (The Maluan Regiment) on 9 June 1957, he was posted to the third battalion of the Reguiment. In 1961, Salaria was posted abroad with his battalion in Katanga.

After the Belgians quit Congo , a civil war situation developed in that country. When the United Nations decided upon military intervention to retrieve the situation, India contributed a brigade of around 3000 men to the U.N. Force. In November 1961, the U.N. Security Council had decided to put a stop to the hostile activities of the Katangese troops in Congo . This greatly angered Tshombe , Katanga’s secessionist leader, and he intensified his ‘hate the UN’ campaign. The result was more violence against UN personnel.

On 5 December 1961, a 3/1 GR Company supported by 3-inch mortar attacked a road-block, established by the Katangese troops, between HQ Katanga command and the Elisabethville airfield at a strategic round about. The enemy roadblock was destroyed and the Gorkhas established a UN roadblock there. When Captain Salaria, with his platoon, tried to link up with the Gorkha Company to reinforce the roadblock, he met strong opposition in the old airfield area. The enemy held the area strongly with two armoured cars and 90 men and brought down heavy automatic and small arms fire on his force from a dug-in position on the right flank. Undeterred by the superior enemy strength and firepower, Salaria decided to take the enemy, head-on, to achieve the objective. The Gorkhas then charged the enemy with bayonets, khukris and hand-grenades. A rocket launcher supported them in the attack. In this sharp encounter, Captain Salaria and his men killed 40 of the enemy and knocked out two enemy cars. His bold action completely demoralised the enemy who fled despite numerical superiority and well-fortified positions. However, in the engagement, Captain Salaria was wounded in the neck by a burst of enemy automatic fire. Ignoring the injury, he continued to fight till he collapsed due to excessive bleeding, dying subsequently of his wounds. [1]

Captain Salaria’s actions prevented the Katangese rebels from encircling the UN Headquarters in Elisabethville. His leadership, courage, unflinching devotion to duty and disregard for his personal safety were in the best traditions of the Indian Army and for which Captain Gurbachan Singh Salaria was posthumously awarded the highest wartime medal, Param Vir Chakra.[2]

On 5 December 1961, 3/1 Gorkha Rifles was ordered to clear a roadblock established by the gendarmerie at a strategic roundabout at Elizabethville, Katanga. The plan was that one company with 2 Swedish armoured cars would attack the position frontally and Captain Gurbachan Singh Salaria with two sections of Gorkhas and two Swedish armoured personnel carriers would advance towards this roadblock from the airfield to act as a cutting-off force.

Captain Salaria with his small force arrived at a distance of 1500 yards from the roadblock at approximately 1312 hours on 5 December 1961 and came under heavy automatic and small-arms fire from an undetected enemy position dug in on his right flank. The enemy also had two armoured cars and about 90 men opposing Captain Salaria’s small force.

Captain Salaria appreciating that he had run into a subsidiary roadblock and ambush and that this enemy force might reinforce the strategic roundabout and thus jeopardize the main operation, decided to remove this opposition. He led a charge with bayonets, khukris, and grenades supported by a rocket launcher. In this gallant engagement, Captain Salaria killed 40 of the enemy and knocked out the two armoured cars. This unexpected bold action completely demoralised the enemy who fled despite their numerical superiority and protected positions.

Captain Salaria was wounded in his neck by a burst of automatic fire but continued to fight till he collapsed due to profuse bleeding. Captain Salaria’s gallant action prevented any enemy movement of the enemy force towards the main battle scene and thus contributed very largely to the success of the main battalion’s action at the roundabout and prevented the encirclement of UN Headquarters in Elizabethville. Captain Salaria subsequently died of his wounds.

Captain Salaira’s personal example, utter disregard for personal safety and dauntless leadership inspired his small but gallant force of sixteen Gorkhas to hold on to their position, dominate the enemy and to inflict heavy casualties despite the enemy’s superiority in numbers and tactical position.

Captain Gurbachan Singh Salaria’s leadership, courage, and unflinching devotion to duty and disregard for personal safety were in the best traditions of our Army