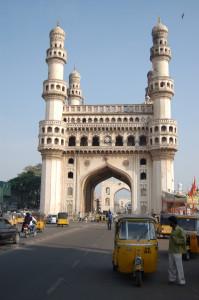 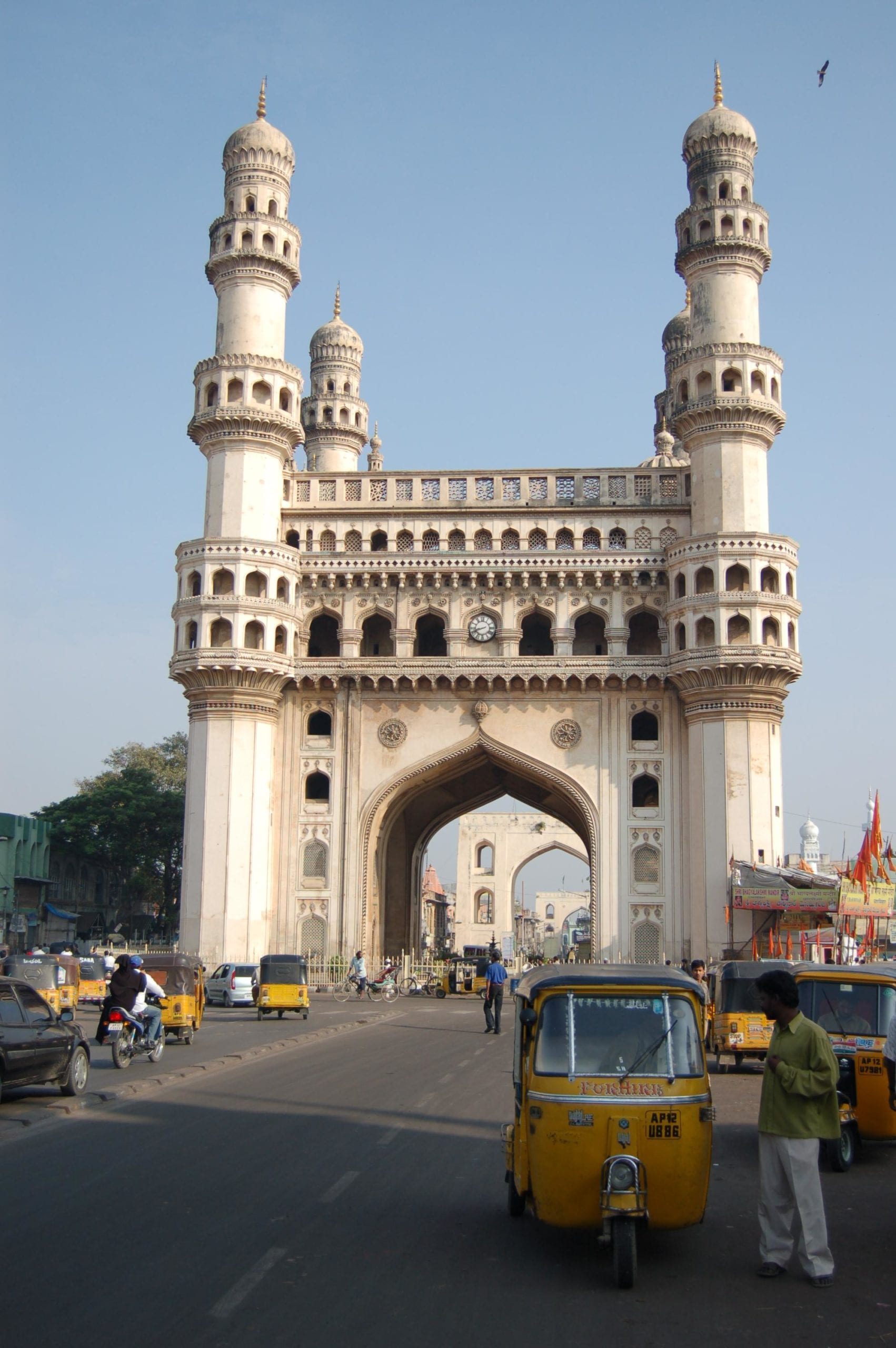 Charminar (Hindi: चार मीनार, Telugu: చార్ మినార్, Urdu: چار مینار,) meaning “Mosque of the Four Minarets” and “Four Towers” is the most famous mosque and monument in the city of Hyderabad, capital of the state of Andhra Pradesh, India.

Sultan Muhammad Quli Qutub Shah, the 5th ruler of the Qutb Shahi dynasty built Charminar in 1591 shortly after he had shifted his capital from Golkonda to what is now known as Hyderabad. He built this famous structure to commemorate the elimination of a plague epidemic from this city. He is said to have prayed for the end of a plague that was ravaging his city and vowed to build a masjid (Islamic mosque) at the very place where he was praying. In 1591 while laying the foundation of Charminar, Quli prayed: “Oh Allah, bestow unto this city peace and prosperity. Let millions of men of all castes, creeds and religions make it their abode, like fish in the water.” Today one can see the city as evidence of the prayer being answered. The Mosque became popularly known as Charminar because of its four (Persian/Hindi char = four) minarets (Minar (Arabic manara) = spire/tower).

This beautiful colossus in granite, lime, mortar and, some say, pulverised marble, was at one time the heart of the city. Initially the wonderful monument with its four arches was so proportionately planned that when the fort was opened one could catch a glimpse of the bustling Hyderabad city as these Charminar arches were facing the most active royal ancestral streets. There is also a legend of an underground tunnel connecting the palace at Golkonda to Charminar, possibly intended as an escape route for the Qutub Shahi rulers in case of a siege, though the exact location of the tunnel is unknown.The monument overlook another beautiful and grand masjid called Makkah Masjid. The area surrounding Charminar is also known by same name. A thriving market still lies around the Charminar, attracting people and merchandise of every description. In its heyday, the Charminar market had some 14,000 shops; today the famous markets known as Laad Baazar and Pather Gatti, near the Charminar, are a favourite of both tourists and locals alike for jewellery, especially known for exquisite bangles and pearls respectively.