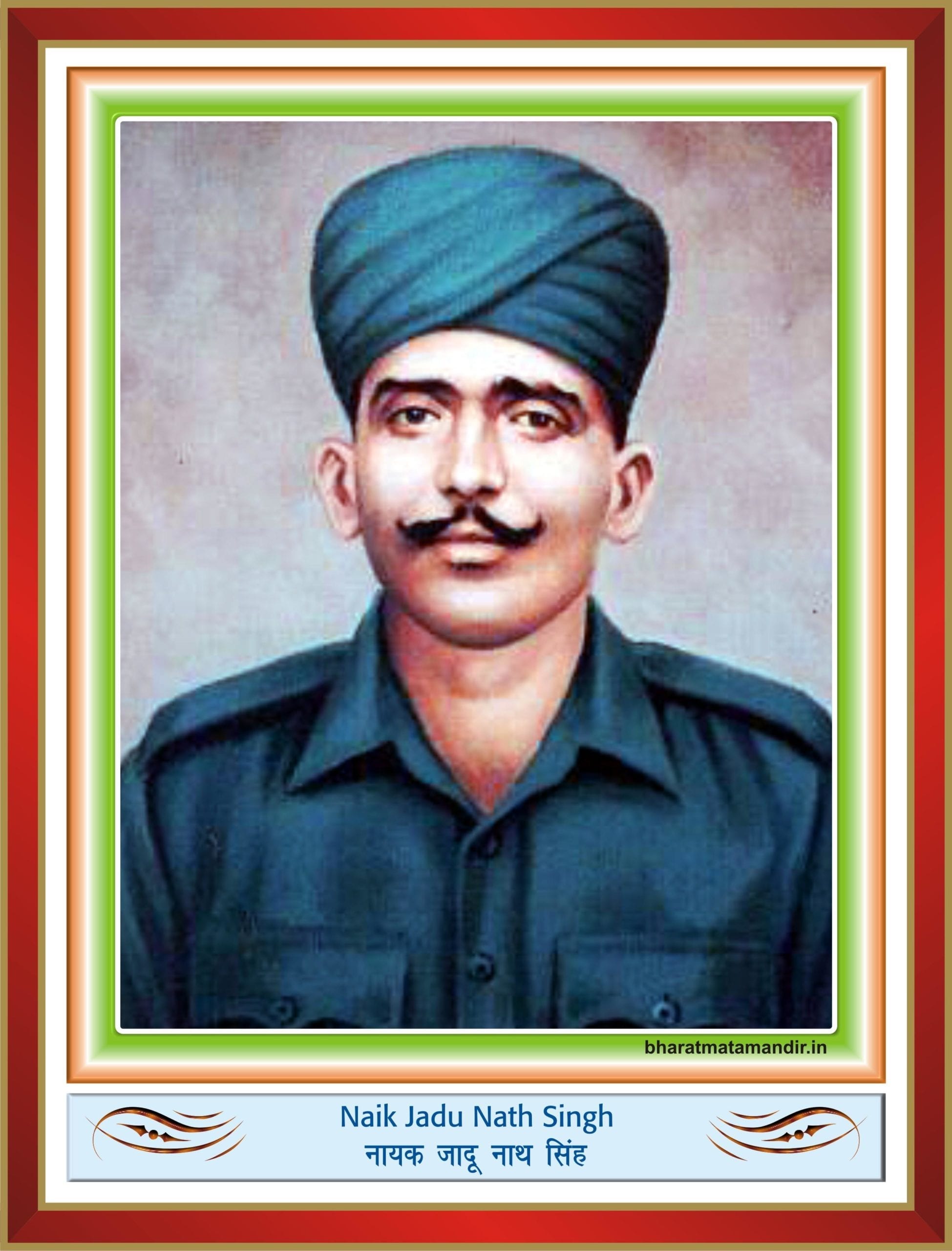 Naik Jadu Nath Singh, a Rathore Rajput, was born on 21 November 1916 in Shahjahanpur, Uttar Pradesh. He was enrolled in the 1 Rajput on 21 November 1941. During the Jammu & Kashmir operations in the winter of 1947, the capture of Jhangar on December 24th, by the Pakistani raiders, placed them in an advantageous position in the Naushahra sector. Being in full command of the communication lines from Mirpur to Poonch, they could now build up their forces for attack on Naushahra. The Army was alive to this threat. In January 1948, they conducted operations to prevent the enemy build up in the area and in the process occupied Kot village to the Northwest of Naushahra. In any case an attack on Naushahra was imminent. Brigadier Usman of the 50 Para Brigade had made adequate preparation to thwart this attack by establishing strong pickets on possible enemy approaches. One of these approaches lay to the north of Naushahra through Tain dhar.

The expected enemy attack came on the foggy morning of February 6th, at 0640 hrs. The enemy started the attack by opening fire from their pickets on the Taindhar ridge on an Indian patrol. Simultaneously, the whole of Tain dhar and the surrounding hills became live with bursts of machine gun and crunches of mortar fire. Meanwhile under the cover of darkness the enemy crept up to the Indian pickets. In the first light of dawn the men on the post saw thousands of hostiles creeping up to them. On the crucial day of February 6th, Naik Jadunath Singh was in command of a forward post of picket No.2 at Taindhar. 9 men garrisoned the post.

The enemy launched their attack in successive waves to take this post. At this juncture Naik Jadunath Singh displayed great valour & superb leadership and used his small force in such a manner that the enemy retreated in utter confusion. When four of his men were wounded he re-organised the battered force for meeting another onslaught. The post did not give in despite its being outnumbered. When all men including him were wounded, he personally took over the Bren gun from the wounded Bren-gunner. The enemy was now right on the walls of the post. Naik Jadunath Singh, unmindful of personal safety encouraged his men to fight. His fire was so devastating that what looked like a certain defeat was turned into a victory. Thus the post was saved a second time.

By now all men of the post had turned into casualties. The enemy put in his third and final attack determined to capture the post. Naik Jadunath Singh, wounded and alone, rose to give a battle for the third time. He came out of the Sangar and firing his sten gun charged on the advancing enemy. The surprised enemy fled in disorder. He met a gallant death, in this third and last charge, when two enemy bullets pierced him in the head and the chest. At a most critical stage in the battle for the defence of Naushahra, he saved his picket from being overrun by the enemy. Naik Jadunath Singh was honoured with the highest wartime gallantry medal, Param Vir Chakra, posthumously.

For this ultimate act of personal sacrifice for the sake of the nation, Naik Jadu Nath Singh was decorated with the nation’s highest award of gallantry.

The citation for the Param Vir Chakra awarded to him reads:

At No 2 picquet on Taindhar on 6 February 1948, No 27373 Naik Jadunath Singh was in command of a forward section post, which bore the full brunt of the enemy attack. Nine men against overwhelming odds garrisoned the little post. The enemy launched its attack in successive waves and with great ferocity to overcome this post. The first wave swept up to the post in a furious attack. Displaying great valour and superb qualities of leadership Naidk Jadunath Singh so used the small force at his disposal that the enemy retired in utter confusion. Four of his men were wounded but Naik Jadunath Singh again showed his qualities of good leadership by reorganizing the battered force under him, for meeting another onslaught. His coolness and courage were of such an order that the men rallied and were ready for the second attack which came with greater determination and in larger number than the preceding one. Though hopelessly outnumbered, this post under the gallant leadership of Naik Jadunath Singh resisted. All were wounded, and Naik Jadunath Singh, though wounded in the right arm, personally took over the Bren gun from the wounded Bren gunner. The enemy was right on the walls of the post but Naid Jadunath Singh once again showed outstanding ability and valour of the highest order in action. By his complete disregard for his personal safety and example of coolness and courage, he encouraged his men to fight. His fire was so devastating, that what looked like impending defeat was turned into a victory and the enemy retreated in chaos leaving the dead and wounded littered on the ground. With this act of supreme heroism and outstanding example of leadership and determination, Naik Jadunath Singh saved the post from the second assault. By this time, all men in the post were casualties. The enemy put in his third and final attack in undiminished numbers and determination to capture this post. Naik Jadunath Singh, now wounded, prepared literally single-handed to give battle for the third time. With great courage and determination, he came out of the sangar and finally with the Sten gun, made a most magnificent single-handed charge on the advancing enemy, who, completely taken by surprise, fled in disorder. Naik Jadunath Singh, however, met his gallant death in his third and last charge when two bullets hit him in the head and chest. Thus, charging single-handedly at the advancing enemy, this Non-Commissioned Officer, performed the highest act of gallantry and self-sacrifice and by so doing saved his section-nay, his whole picquet from being overrun by the enemy at the most critical stage in the battle for the defence of Nushera.