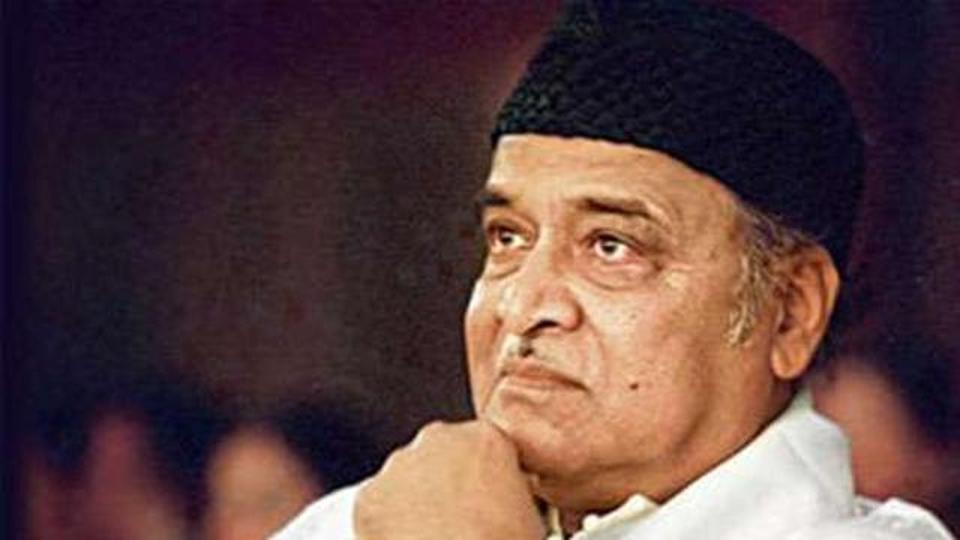 Bhupen Hazarika (8 September 1926 – 5 November 2011) was an Indian playback singer, lyricist, musician, singer, poet and film-maker from Assam, widely known as Sudhakantha. His songs, written and sung mainly in the Assamese language by himself, are marked by humanity and universal brotherhood and have been translated and sung in many languages, most notably in Bengali and Hindi. His songs, based on the themes of communal amity, universal justice and empathy, have become popular among the people of Assam, besides West Bengal and Bangladesh. He is also acknowledged to have introduced the culture and folk music of Assam and Northeast India to Hindi cinema at the national level. He received the National Film Award for Best Music Direction in 1975. Recipient of Sangeet Natak Akademi Award (1987), Padmashri (1977), and Padmabhushan (2001), Hazarika was awarded with Dada Saheb Phalke Award (1992), India’s highest award in cinema, by the Government of India and Sangeet Natak Akademi Fellowship (2008), the highest award of the Sangeet Natak Akademi, India’s The National Academy for Music, Dance and Drama. He was posthumously awarded the Padma Vibhushan, India’s second-highest civilian award, in 2012. Hazarika also held the position of the Chairman of the Sangeet Natak Akademi from December 1998 to December 2003. He was posthumously awarded the Bharat Ratna, India’s highest civilian award, in 2019.

Hazarika, who made fame as a musician, was born on 8 September 1926 to Nilakanta and Shantipriya Hazarika in Sadiya (শদিয়া), Assam. His father was originally from Nazira, a town located in Sivasagar district. The eldest of ten children, Bhupen Hazarika (as also his siblings) was exposed to the musical influence of his mother, who exposed him to lullabies and traditional Music of Assam. His father moved to the Bharalumukh region of Guwahati in 1929, in search of better prospects, where Bhupen Hazarika spent his early childhood. In 1932 his father further moved to Dhubri, and in 1935 to Tezpur. It was in Tezpur that Bhupen Hazarika, then 10 years of age, was discovered by Jyotiprasad Agarwala, the noted Assamese lyricist, playwright and the first Assames Filmmaker and Bishnu Prasad Rabha, renowned Assamese artist and revolutionary poet, where he sang a Borgeet (the traditional classical Assamese devotional songs written by Srimanta Sankardeva and Sri Sri Madhabdeva), taught by his mother at a public function. In 1936, Bhupen Hazarika accompanied them to Kolkata where he recorded his first song at the Aurora Studio for the Selona Company. His association with the icons of Assamese Culture at Tezpur was the beginning of his artistic growth and credentials. Subsequently, Hazarika sang two songs in Agarwala’s film Indramalati (1939): Kaxote Kolosi Loi and Biswo Bijoyi Naujawan at the age of 12. He wrote his first song, Agnijugor Firingoti Moi at the age of 13 and he was well on his way to becoming a lyricist, composer and singer.

Hazarika studied at Sonaram High School at Guwahati, Dhubri Government High School and matriculated from Tezpur High School in 1940. He completed his Intermediate Arts from Cotton College in 1942, and his BA (1944) and MA (1946) in Political Science from Banaras Hindu University. For a brief period he worked at All India Radio, Guwahati when he won a scholarship from Columbia University and set sail for New York in 1949. There he earned a PhD (1952) on his thesis “Proposals for Preparing India’s Basic Education to use Audio-Visual Techniques in Adult Education”. In New York Bhupen Hazarika befriended Paul Robeson, a prominent civil rights activist, who influenced him in his song Bistirno parore which is based on the imagery and theme of Robeson’s Ol’ Man River. This song is translated in various Indian languages, including Bengali and Hindi and sung by the artist himself, and is still popular. Being inspired from some other foreign ones, he also composed several other songs in Indian languages. He was exposed to the Spiritual, and the multi-lingual version of We are in the Same Boat Brother became a regular feature in his stage performance. At Columbia University, he met Priyamvada Patel, whom he married in 1950. Tez Hazarika, their only child, was born in 1952, and he returned to India in 1953.

Hazarika began close association with the leftist Indian People’s Theatre Association soon after returning from the USA in 1953 and became the Secretary of the Reception Committee of the Third All Assam Conference of IPTA, held in Guwahati in 1955.

After completing his MA he briefly worked at the All India Radio station at Guwahati before embarking for his doctoral studies at Columbia University. His thesis “DEMYSTIFYING DR. BHUPEN HAZARIKA: envisioning education for India”, edited by Tej Hazarika and published by Cool Grove Press will be available in the US in days.Soon after completing his education, he became a teacher at the Gauhati University. But after a few years, he left the job and went to Kolkata where he established himself as a successful music director and singer. During that period, Hazarika made several award-winning Assamese films such as Shakuntala, Pratidhwani, etc. and composed evergreen music for many Assamese films. He was also considered as a new trend setter in Bengali music. The famous musical genre of West Bengal, the Jivanmukhi geet started by Kabir Suman in 1990’s is thought to be influenced by Hazarika. Bhupen Hazarika composed music for films from Bangladesh too which got international acclaim. He was elected the President of the Asam Sahitya Sabha in 1993. In 1967, Hazarika got elected as a member of Assam Assembly from Nauboicha constituency.

From early in his life, he was at the forefront of a social battle against the entrenched forces of casteism that sneered at a member of the ‘Koibarta community making it as a musician of note, and kept him away from the upper-caste Brahmin woman he had loved. Eventually, when the spirited Hazarika did marry, it was to a Brahmin woman, his revenge of sorts against a caste-ridden society.

He was introduced to Kalpana Lajmi in the early 1980s by his friend Hemendra Prasad Barooah in Kolkata. Her first feature film Ek Pal with music score by Dr Bhupen Hazarika was produced by Dr Hazarika’s childhood friend and India’s top tea planter Hemendra Prasad Barooah, (Bhupen Hazarika on IMDb ) (1986). Subsequently, Lajmi began assisting him professionally and personally till the end of his life. In the period after the release of Ek Pal (1986) until his death, Bhupen Hazarika mainly concentrated on Hindi films, most of which were directed by Kalpana Lajmi. Ek Pal (1986), Rudaali (1993) and Daman: A Victim of Marital Violence (2001) are major films this period. Many of his earlier songs were re-written in Hindi and used as played-back songs in these films. These songs tried to cater to the Hindi film milieu and their social activist lyrics were browbeaten into the lowest common denominator. He served as an MLA (Independent) during 1967-72 in the Assam Legislative Assembly from Nauboicha Constituency. He contested as a Bharatiya Janata Party candidate in the 2004 Lok Sabha elections from the Guwahati constituency, persuaded by Chandan Mitra via Kalpana Lajmi[21] which he lost to the Indian National Congress candidate Kirip Chaliha.

Hazarika was hospitalized in the Kokilaben Dhirubhai Ambani Hospital and Medical Research Institute in Mumbai in 2011. He was admitted to the intensive care unit on 30 June 2011. He died of multi-organ failure on 5 November 2011. His body lay in state at Judges Field in Guwahati and cremated on 9 November 2011 near the Brahmaputra river in a plot of land donated by Gauhati University. His funeral was attended by an estimated half a million people