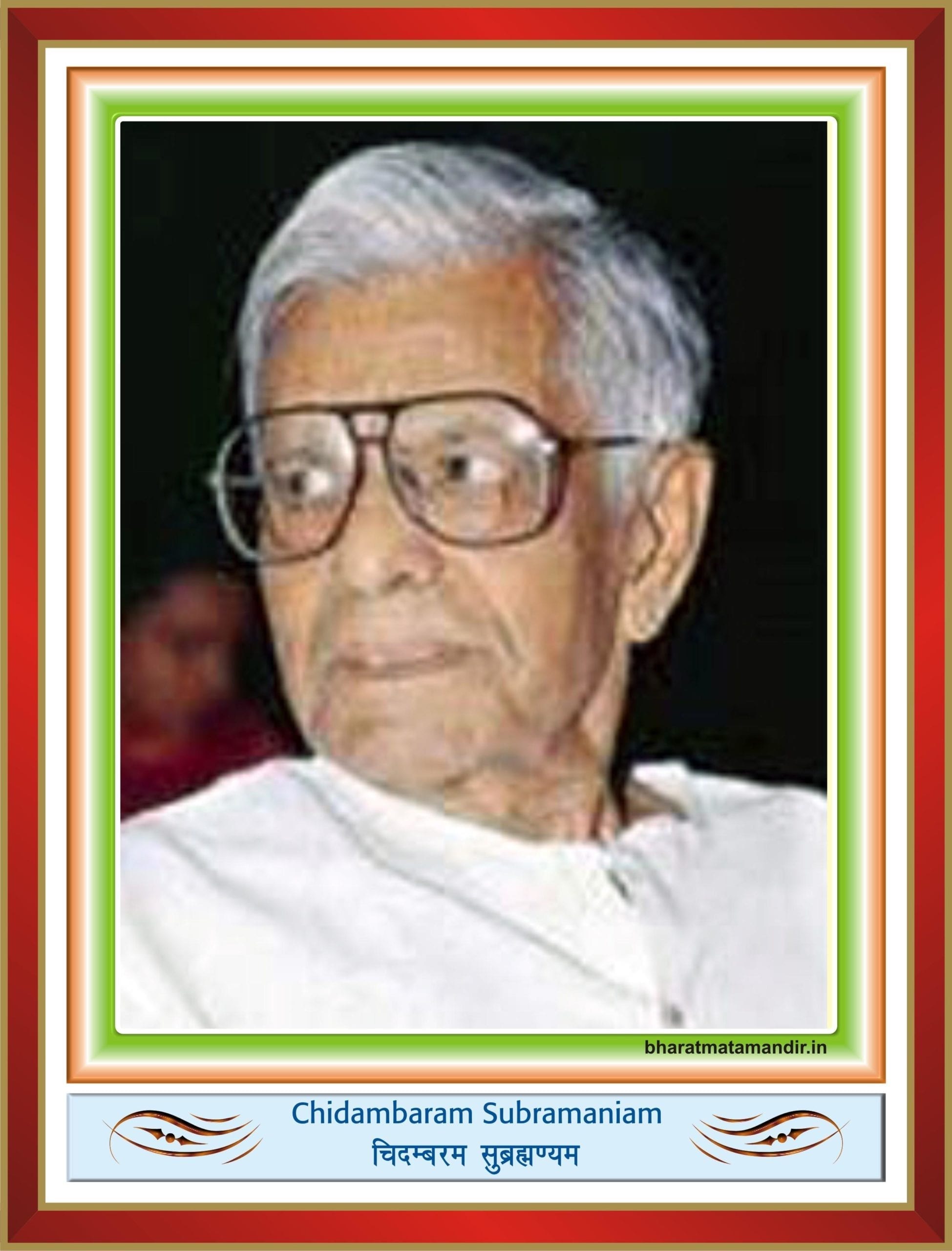 Chidambaram Subramaniam (Tamil: சிதம்பரம் சுப்பிரமணியம்) (commonly known as CS)(January 30, 1910 – November 7, 2000), was the man who ushered in an era of self-sufficiency in food production in India. He hails from an agricultural family in Pollachi near Coimbatore. He was conferred the Bharat Ratna in 1998.

C. Subramanium was born on January 30, 1910, to Chidambara Gounder and his wife, in a village called Senguttaipalayam. Subramaniam completed his early education in Pollachi before moving to Chennai where he did a B.Sc in Physics at the Presidency College, Chennai. Later he took a degree in law at the Law college, Chennai.

A protege of Rajaji, Subramaniam was trained in the rudiments of politics and administration. He was a Minister (Education, Law and Finance) in the then Madras State from 1952 to 1962. He was the Leader of the House in the Madras Legislative Assembly for 10 years from 1952. He was elected to the Lok Sabha in 1962 and was the Minister for Steel and Mines. Subsequently, he handled important portfolios like agriculture (in 1965 when he spearheaded the Green Revolution), and later the portfolios of Finance and Defence. He was the finance minister during the emergency. He also worked as the deputy chairperson of the planning commission of India.

When the historic split in the Congress took place in 1969, he cast his lot with Indira Gandhi and became the interim president of the faction she headed. He stood by her when she clamped the Emergency in 1975, but parted ways later and joined the Congress (Urs) faction led by Devraj Urs

C. Subramaniam was appointed Governor of Maharashtra in 1990. He transformed the Raj Bhavan into a beehive of activity by holding frequent meetings with leading academics, industrialists, representatives of non-governmental organisations and prominent citizens on issues crucial to the community. He had to resign after a newspaper reporter overheard and published an informal remark of his criticising the style of functioning of the then Indian Prime Minister, Mr P.V. Narasimha Rao.

Subramaniam participated in the freedom struggle actively and went to prison. He was later elected to the Constituent Assembly and had a hand in the framing of the Constitution of India.

C. Subramaniam is best known as the architect of India’s modern agricultural development policy, after the success of his programme which led to a record production of wheat in 1972 — an achievement termed as the Indian Green Revolution. As Minister for Food and Agriculture, he played a decisive role in the introduction of high-yielding varieties of seeds and more intensive application of fertilizers which paved the way for increased output of cereals in the late 60s and attainment of self-sufficiency in food-grains in the country. About his contribution, Dr. Norman E. Borlaug, the Nobel Laureate, writes: “The vision and influence of Mr. Subramaniam in bringing about agricultural change and in the very necessary political decisions needed to make the new approach effective, should never be under-emphasized. The groundwork for this advance (in the production of wheat) was solidly laid during that period (1964-67) when Mr. Subramaniam was the guiding political force instituting change.”

Among his proteges who are notable in their own right are M.S. Swaminathan, who played a major role in translating the dream of a ‘green revolution’ into reality; former Agriculture Secretary B. Sivaraman (who, along with Subramaniam and Swaminathan, formed the three ‘S’s instrumental in heralding the Green Revolution), and Verghese Kurien Chairman of the National Dairy Development Board.

He was the founder of National Agro Foundation, Chennai and Bharathidasan Institute of Management Tiruchirappalli.