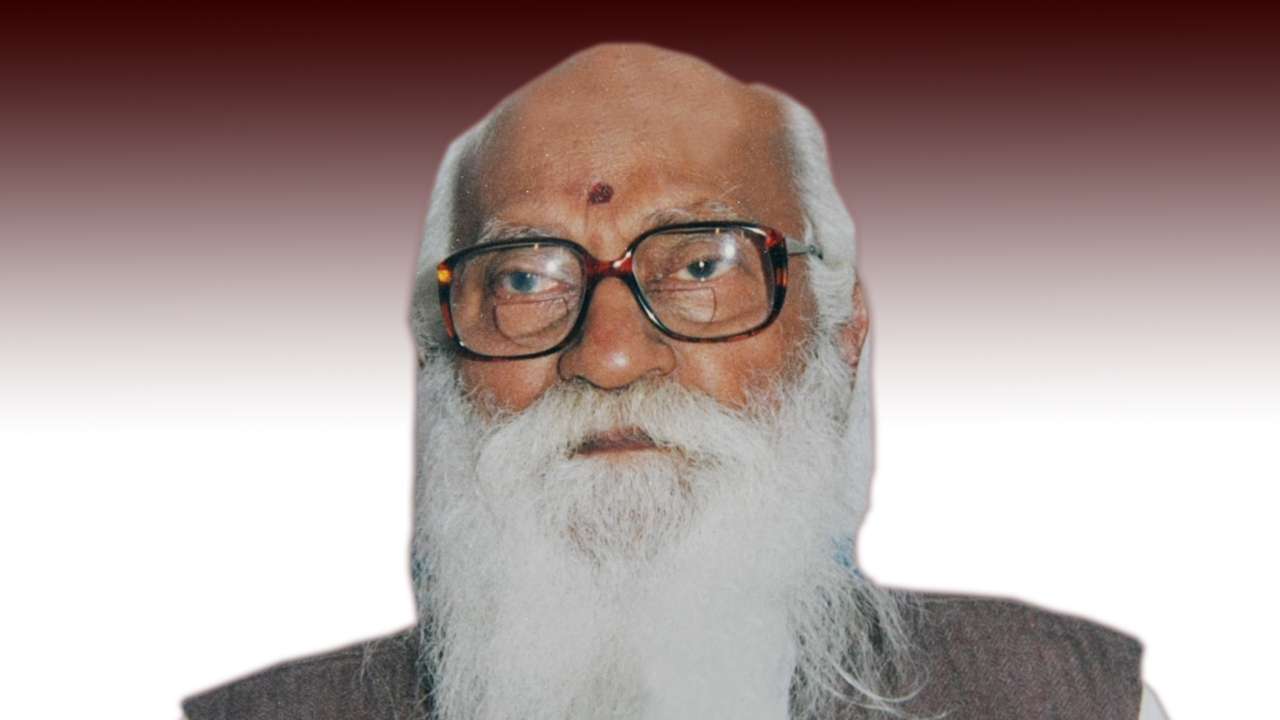 Chandikadas Amritrao Deshmukh also known as Nanaji Deshmukh (11 October 1916 – 27 February 2010) was a social activist from India. He worked in the fields of education, health, and rural self-reliance. He was honoured with the Padma Vibhushan in 1999. He was posthumously awarded the Bharat Ratna, India’s highest civilian award in 2019 by Government of India. He was a leader of the Bharatiya Jana Sangh and also a member of the Rajya Sabha.

The Prime Minister, Shri Narendra Modi paying floral tributes to Nanaji Deshmukh, on the Birth Centenary Celebrations of Nanaji Deshmukh, at IARI, New Delhi on 11 October 2017
Nanaji was born on 11 October 1916 into a Marathi-speaking Deshastha Brahmin family at Kadoli, which is a small town in the Hingoli district. He had a great desire for education despite the lack of money. Due to this, he worked as a vegetable seller to raise money for his education. He was inspired by Bal Gangadhar Tilak.

He went to high school in Sikar, where the Raoraja of Sikar gave him a scholarship. He studied in Birla college (Now BITS Pilani) ). In the same year, he also joined the Rashtriya Swayamsevak Sangh (RSS).

Though born in Maharashtra, the fields of his activities were Rajasthan and Uttar Pradesh. Seeing his devotion, the then RSS chief M. S. Golwalkar sent him to Gorakhpur (U.P) as “pracharak” (full-time functionary). He rose to be the Saha Prant Pracharak of the whole of Uttar Pradesh (which has now become the eighth prant of RSS).

The Vice President, Bhairon Singh Shekhawat presenting Shri Naresh Samata Puraskar to Shri Nanaji Deshmukh, in New Delhi on 8 April 2006.
Deshmukh became inspired by Bal Gangadhar Tilak and his nationalist ideology, as well as showing an acquired interest in social service and activities. His family was in close contact with Keshav Baliram Hedgewar who was a regular visitor to Deshmukh’s family. He could discern potential in Nanaji and encouraged him to attend RSS shakhas.

In 1940, after Hedgewar’s death, many youngsters inspired by him joined the RSS in Maharashtra. Deshmukh was among those who joined the RSS devoting their whole life in service to the nation. He was sent to Uttar Pradesh as a Pracharak. At Agra, he met Deen Dayal Upadhyaya for the first time. Later, Deshmukh went to Gorakhpur as a pracharak where he took great pains to introduce Sangh ideology in the eastern UP. It was not an easy task at that time as the Sangh had no funds to meet even day-to-day expenses. He had to stay in a Dharmashala but had to keep on changing Dharmashalas as no one was allowed to stay there for more than three days consecutively. Ultimately, he was given shelter by Baba Raghavdas on the condition that he would also cook meals for him.

When in 1947, the RSS decided to launch two journals Rashtradharma, Panchjanya and a newspaper called Swadesh,Shri Atal Bihari Vajpayee was assigned the responsibility of the editor and Deen Dayal Upadhyaya was made the Margdharshak with Nanaji as the managing director. It was a challenging task as the organisation was hard up for money to bring out the publications, yet it did never dampen their spirits and these publications gained popularity and recognition because of their strong nationalistic content.

Mahatma Gandhi’s assassination led to imposition of ban on the RSS and publication work came to a grinding halt. A different strategy was adopted keeping the ban in mind and Deshmukh was the brain behind underground publication work by the RSS those days.

Soon, BJS became a force to reckon with in Uttar Pradesh. In 1967 BJS became the part of United Legislature Party and joined the Government headed by Chaudhary Charan Singh. Deshmukh played a crucial role in evolving the alliance as he enjoyed good relations with Charan Singh and Ram Manohar Lohia. He was successful in bringing leaders of different political backgrounds on one platform to give Uttar Pradesh its first non-Congress government.

Chandra Bhanu Gupta, former UP chief minister had to face one of the biggest challenges of his political career when Deshmukh outwitted him not once but thrice. On one occasion, he planned a strategy to defeat the Congress nominee and Gupta’s favourite in Rajya Sabha. When Gupta himself contested elections from Lucknow in 1957, Deshmukh crafted an alliance with socialist groups and helped Babu Triloki Singh in registering an impressive win over Gupta. Gupta faced another embarrassment when he was again defeated at Maudaha in Uttar Pradesh.

In Uttar Pradesh, BJS gained strength from Upadhyaya’s vision, Atal Bihari Vajpayee’s oratory skills and Deshmukh’s organizational work and it emerged as an important player in the state politics. Deshmukh always shared good relations not only with his party colleagues but also with his opponents. Gupta, who suffered many defeats at the hands of Deshmukh, yet continued to have great respect for him and called him ‘Nana Phadanvis ‘. His relations with Dr. Ram Manohar Lohia changed the course of Indian politics. Once he invited Lohia in BJS karaykarta sammelan where he met Upadhyaya for the first time and this association brought the BJS closer to other socialist parties in exposing the Congress and its misrule.

Desmukh actively participated in Bhoodan Movement started by Vinoba Bhave. By spending two months with Vinoba, he was inspired by the success and appeal of the movement.

The months that followed the judgement of Justice Jagmohan Lal Sinha of the Allahabad High Court, setting aside the election of Indira Gandhi in June 1974, were traumatic. An anti-Indira agitation, led by Jai Prakash Narayan, was gathering momentum.

In the latter half of the year a massive procession, led by Narayan was taken out in Patna. As the procession wended its way through the roads of the state capital, the police made a lathi charge and, it is said, the Sarvodaya leader was the target. The final assault came when Narayan’s supporters were escorting him to safety. One of the supporters sprang to his leader’s protection, covered him and took all the lathi blows on himself. That man was Deshmukh. One of his arms was fractured in this daring effort.

Later, Narayan himself and Morarji Desai, who became the Prime Minister heading the Janata Party Government, publicly praised the courage shown by Deshmukh and, as a reward, offered him the Cabinet portfolio of Industry, but Deshmukh spurned the overture. Deshmukh had won in the 1977 election held after revocation of the Emergency with a comfortable margin from Balrampur Lok Sabha constituency of Uttar Pradesh.

In 1980, when he turned 60, he opted not only from the electoral fray but also politics. He later devoted himself completely to social and constructive work, lived in ashrams and never projected himself.

When Narayan gave the call for “Total Revolution” Deshmukh responded by giving total support to this movement. When the Janata Party was formed, Deshmukh was one of its main architects. Janata Party stormed into power by sweeping off the Congress.

He was nominated to Rajya Sabha by the NDA Government in the year 1999 in recognition of his services to the nation.

The Vice President Shri Bhairon Singh Shekhawat conferring the ‘Dnyaneswar Award’ to noted & veteran social worker Shri Nanaji Deshmukh, in New Delhi on 1 June 2005.
After retirement from active politics Deshmukh then served Deendayal Research Institute that he himself had established way back in 1969. He wanted Deendayal Research Institute to be devoted to strengthening the movement for constructive work in Bharat.

He did pioneering work towards the anti-poverty and minimum needs programme. Other areas of his work were agriculture and cottage industry, rural health and rural education. Deshmukh assumed chairmanship of the institute after relinquishing politics and devoted all his time to building up the institute. He was also instrumental in carrying out social restructuring programme in over 500 villages of both Uttar Pradesh and Madhya Pradesh states of India. He also published the journal “Manthan” (introspection) which was edited by K.R. Malkani for many years.

Deshmukh did a lot of social work in Gonda (U.P.) and Beed (Maharashtra). The motto of his project was: “Har hath ko denge kaam, har khet ko denge paanee”.

He finally settled down at the picturesque Chitrakoot, a holy place on the borders of Uttar Pradesh and Madhya Pradesh. It was in 1969 that Deshmukh visited Chitrakoot for the first time. He was moved to see the pathetic condition of the society in the karmabhoomi of Ram, the place where Ram spent 12 out of the 14 years in exile. He sat by the holy River Mandakini, and resolved to change the face of Chitrakoot during his lifetime. While in exile, Ram started working for the upliftment of the downtrodden here. With this important historical and inspiring background, Deshmukh made Chitrakoot the centre of his social work.

He chose to serve the poorest among the poor. He used to remark jokingly that he admired Vanavasi Ram more than Raja Ram and so would like to spend the rest of his life in Chitrakoot among the vanavasis and most backward sections of the society.

He also established Chitarkoot Gramoday Vishwavidyalaya in Chitrakoot, India’s first rural University, and served as its Chancellor. Nanaji implemented the philosophy of integral humanism to improve the living standards of more than 150 villages of bundelkhand.

He was awarded Bharat Ratna in 2019 (Posthumously) and Padma Vibhushan in 1999. India’s former President A.P.J. Abdul Kalam praised Deshmukh for his “single-minded devotion to the uplift of the people”.

Deshmukh died on 27 February 2010 in the premises of Chitrakoot Gramoday Vishwavidyalaya that he established. He was unwell for some time due to geriatric problems and had refused to be taken to Delhi for treatment. He bequeathed his body to Dadhichi Dehdaan Sanstha of New Delhi which was accepted, and his body was sent to All India Institute of Medical Sciences for medical research. His body was sent by road up to Satna, Madhya Pradesh, and hundreds of people and local residents accompanied this last procession to Satna. From Satna, his body was carried by a chartered plane to New Delhi. In New Delhi, his body was kept for few hours at Keshav Sadan (Delhi headquarters of the Rashtriya Swayam Sewak Sangh), and after that the body was donated to AIIMS with the help of Dadhichi Dehdan Sanstha.