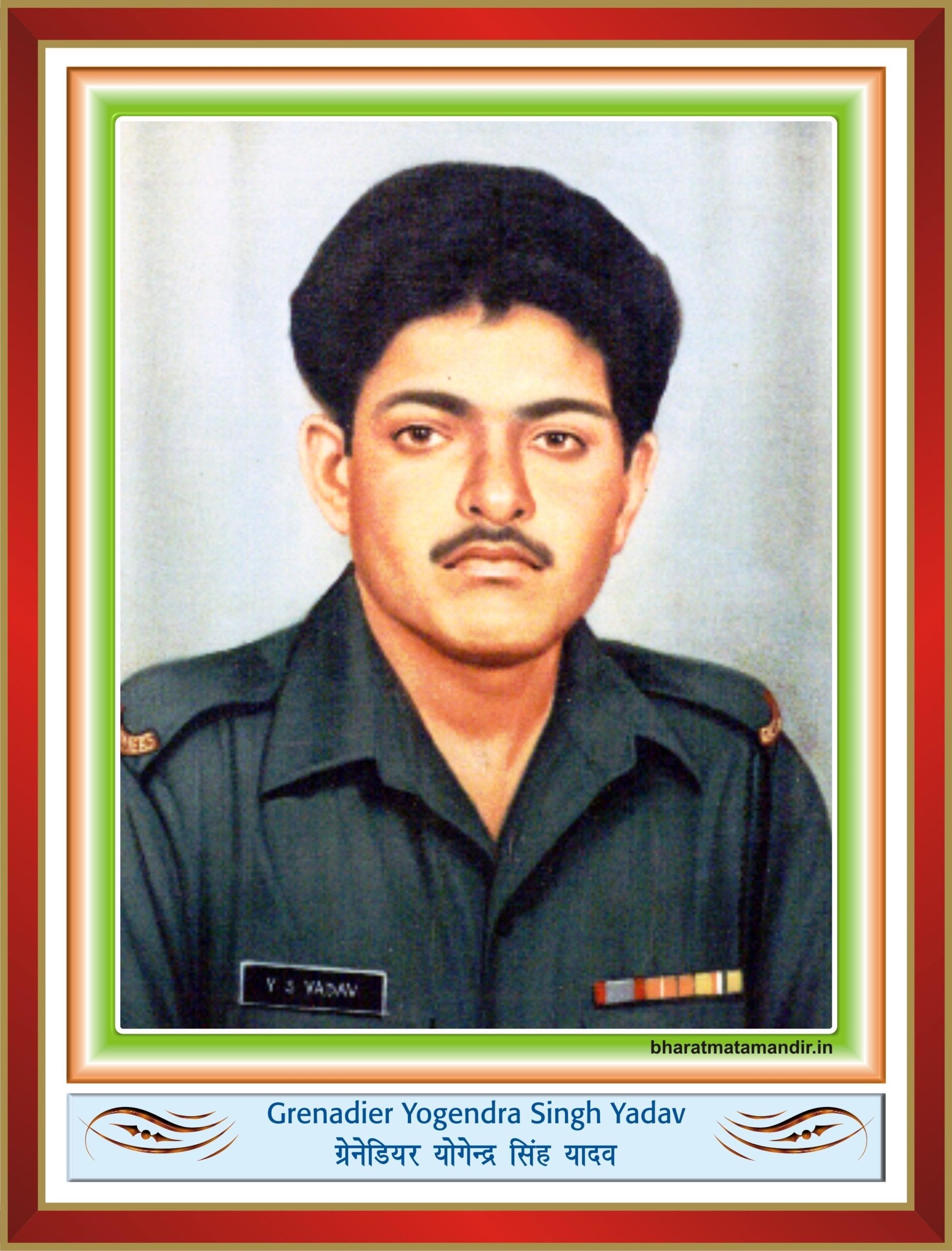 Grenadier Yogendra Singh Yadav of the Indian army was awarded the highest Indian military honour, Param Vir Chakra for his actions during the Kargil War on 4 July 1999.

Grenadier Yogendra Singh Yadav, 18 Grenadiers, in the early morning hours of 4 July 1999 was part of the Commando ‘Ghatak‘ (Deadly or Lethal) Platoon tasked to capture three strategic bunkers on Tiger Hill. The approach was a vertical cliff face, snowbound at 16,500 feet. Grenadier Yadav, volunteering to lead the assault, was climbing the cliff face and fixing the ropes for further assault on the feature. Half-way up, an enemy bunker opened up machine gun and rocket fire. His Platoon Commander and two others fell to the heavy volume of automatic fire. Realising the enormity of the situation, he continued to scale the sheer cliff face alone through a volley of fire. In spite of having been hit by three bullets in his groin and shoulder, he climbed the remaining 60 feet and reached the top. He crawled up to the bunker critically injured and lobbed a grenade killing four Pakistani soldiers and neutralising enemy fire. This act was directly instrumental in facilitating the rest of the platoon in climbing up the cliff face.[1]

Grievously injured but with reckless disregard to personal safety, Grenadier Yadav now charged on to the second bunker and neutralised it with two of his colleagues in fierce hand-to-hand combat, killing three Pakistani soldiers. This extraordinary act motivated the rest of the platoon who quickly traversed the treacherous terrain and, braving hostile fire, charged onto the enemy to capture Tiger Hill, a vital objective. For his sustained display of bravery, Grenadier Yogender Singh Yadav was awarded the Param Vir Chakra, India’s highest medal for gallantry.

The Param Vir Chakra was announced for Yadav posthumously, but it was soon discovered that he was recuperating in a hospital, and it was his namesake that had been slain in the mission.[2]

Grenadier Yogender Singh Yadav was part of the leading team of a Ghatak Platoon tasked to capture Tiger Hill on the night of ¾ July 1999. The approach to the top was steep, snowbound and rocky. Grenadier Yogender Singh Yadav, unmindful of the danger involved, volunteered to lead and fix the rope for his team to climb up. On seeing the team, the enemy opened intense automatic, grenade, rocket and artillery fire killing the Commander and two of his colleagues and the platoon was stalled. Realizing the gravity of the situation, Grenadier Yogender Singh Yadav crawled up to the enemy position to silence it and in the process sustained multiple bullet injuries. Unmindful of his injuries and in the hail of enemy bullets, Grenadier Yogender Singh Yadav continued climbing towards the enemy positions, lobbed grenades, continued firing from his weapons and killed four enemy soldiers in close combat and silenced the automatic fire. Despite multiple bullet injuries, he refused to be evacuated and continued the charge. Inspired by his gallant act, the platoon charged on the other positions with renewed punch and captured Tiger Hill Top.