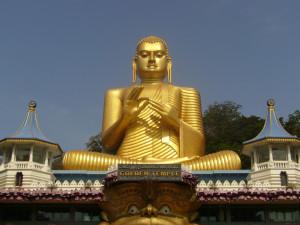 Bodh Gaya or Bodhgaya (Hindi: बोधगया) is a religious place in Gaya district in the Indian state of Bihar. It is famous for being the place of Gautama Buddha‘s attainment of nirvana (Enlightenment).Historically, it was known as the Bodhimanda (ground around the Bodhi-tree), Uruvela, Sambodhi, Vajrasana and Mahabodhi. The name Bodh Gaya did not come into use until the 18th century. The main monastery of Bodhgaya used to be called the Bodhimanda-vihāra (Pali). Now it is called the Mahabodhi Temple.

For Buddhists, Bodh Gaya is the most important of the main four pilgrimage sites related to the life of Gautama Buddha, the other three being Kushinagar, Lumbini, and Sarnath. In 2002, Mahabodhi Temple, located in Bodh Gaya, became a UNESCO A small temple beneath the Bodhi tree, Bodh Gaya, built in 7th century, after the original built by Mauryan Emperor Ashoka in 3rd century BC, ca. 1810

Offerings found in Bodh Gaya under the “Enlightenment Throne of the Buddha”, with a decorated coin of the Kushan emperor Huvishka, 3rd century CE.According to Buddhist traditions, circa 500 BC Prince Gautama Siddhartha, wandering as an ascetic, reached the sylvan banks of Falgu River, near the city of Gaya. There he sat in meditation under a bodhi tree (Ficus religiosa). After three days and three nights of meditation, Siddharta attained enlightenment and insight, and the answers that he had sought. He then spent seven weeks at seven different spots in the vicinity meditating and considering his experience. After seven weeks, he travelled to Sarnath, where he began teaching Buddhism.

Disciples of Gautama Siddhartha began to visit the place where he had gained enlightenment during the full moon in the month of Vaisakh (April-May), as per the Hindu calendar. Over time, the place became known as Bodh Gaya, the day of enlightenment as Buddha Purnima, and the tree as the Bodhi Tree.

The history of Bodh Gaya is documented by many inscriptions and pilgrimage accounts. Foremost among these are the accounts of the Chinese pilgrims Faxian in the 5th century and Xuanzang in the 7th century. The area was at the heart of a Buddhist civilization for centuries, until it was conquered by Turkish armies in the 13th century.

The complex, located about 96 kilometres from Patna,  Mahabodhi Temple with the diamond throne (called the Vajrasana) and the holy Bodhi tree. This tree was originally a

It is believed that 250 years after the Enlightenment of the Buddha, Emperor Asoka visited Bodh Gaya. He is considered to be the founder of the original Mahabodhi temple.