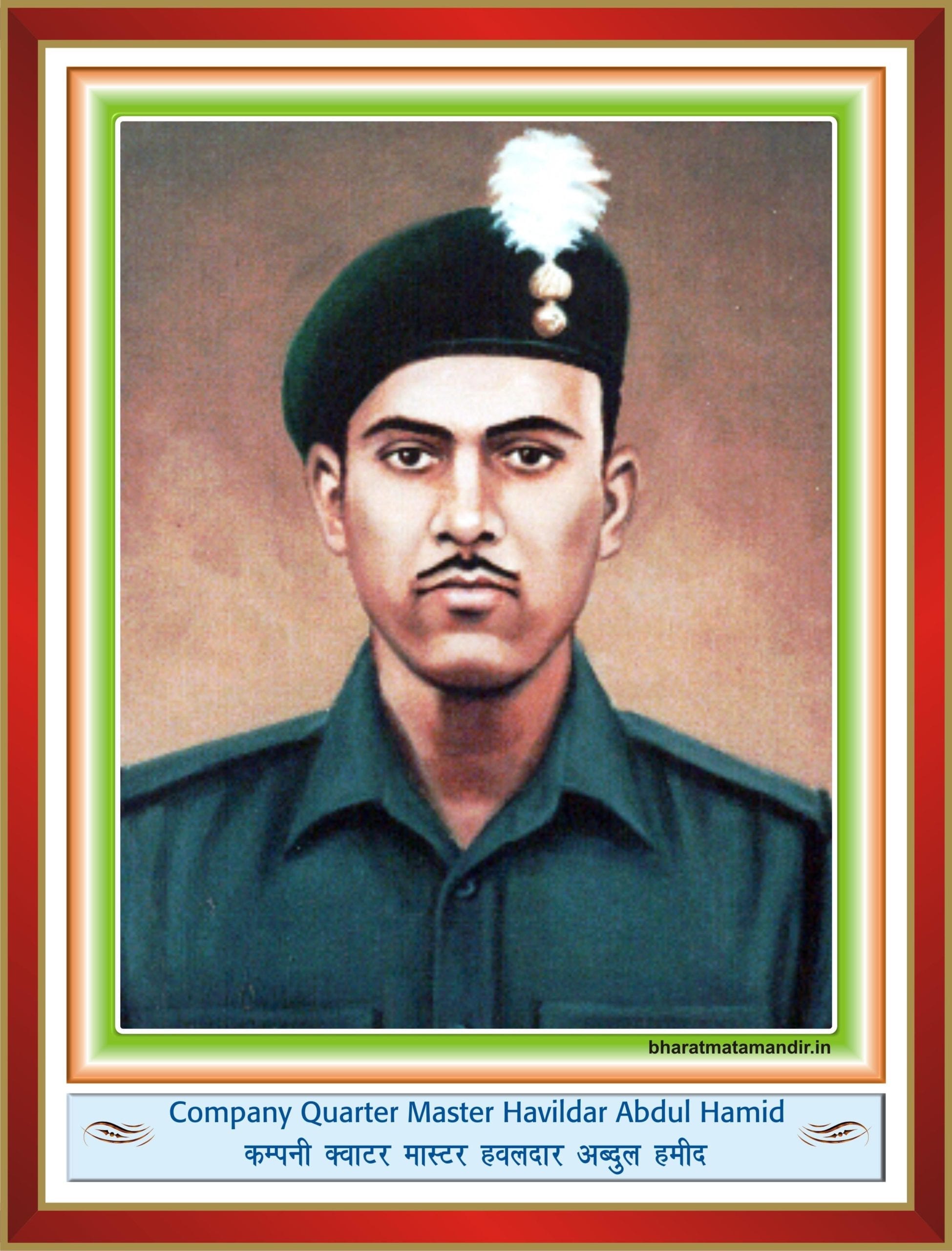 Company Quarter Master Havildar Abdul Hamid (July 1, 1933 – September 10, 1965) was a soldier in the 4 Grenadiers, Indian Army, who died in the Khem Karan sector during the Indo-Pakistani War of 1965, and was the posthumous recipient of the Republic of India‘s highest military decoration, the Param Vir Chakra. The award was announced on 16 September 1965, less than a week after the battle that cost his life.

He was born at Dhamupur village of Ghazipur District in Uttar Pradesh on July 1, 1933, the son of Usman Farooqi , a Policeman. He was enrolled in the 4 Grenadiers on 27 December 1954. In the 1988 Television serial Param Vir Chakra by Chetan Anand, Abdul Hamid is played by actor Naseeruddin Shah.

In the new defence plan of the Division, 4 Grenadiers occupied a vital area ahead of Chima village on the Khem Karan-Bhikhiwind road. A firm hold on this area was considered essential to sustain the divisional plan of defence. On September 8 night, the enemy made repeated probing attacks on Grenadiers positions but was frustrated in all the attempts. The most serious threat, however, developed when the enemy attacked with a regiment of Patton tanks at 0800 hours on September 10. The attack was preceded by intense artillery shelling so much so that a shell littered every yard of ground occupied by the battalion.

By 0900 hours, the enemy tanks had penetrated the forward company positions. At this critical juncture, Hamid was commanding a recoilless gun detachment. Seeing the gravity of the situation, he moved out to a flank with his gun mounted on a jeep. Intense enemy shelling and tank fire did not deter him. From his new position, he knocked out the leading enemy tank with accurate fire. Then he changed his position and knocked out another enemy tank. By this time the enemy who had spotted his position brought down concentrated machine gun and high explosive fire on him.

But he kept on firing. As he fired to hit yet another enemy tank, he was mortally wounded by a high explosive shell. Throughout this action, CQMH Abdul Hamid inspired his comrades to put up a gallant fight to beat off the enemy tank assault. His sustained act of bravery and disregard for personal safety, in the face of constant enemy fire, were a shining example, not only to his unit but also to the whole division and were in the highest traditions of the Indian Army. Company Quarter Master Havildar Abdul Hamid was honoured with the highest war time gallantry medal, Param Vir Chakra, posthumously

His citation gives him credit for three tanks destroyed; in fact he had destroyed no less than 7 enemy tanks [1]. This is because the citation for Abdul Hamid’s PVC was sent on the evening on 9 September 1965 but he destroyed 3 more tanks on the next day, plus the seventh one which also killed him.

PVC Abdul Hamid’s actions exposed an important vulnerability in the M48 Patton and after the 1965 war, the M48 was largely forced into extinction from military use around the world and replaced by the M60. India set up a war memorial named “Patton Nagar” (“Patton Town”) in Khemkaran District, where the captured Pakistani Patton tanks are displayed. A U.S. study of the battles in South Asia concluded that weaker areas of the Patton’s armor (such as rear and sides) could in fact be penetrated by the Ordnance QF 20 pounder guns of the Centurion tank and the 75mm guns of the AMX-13. The U.S had given Pakistan the Patton tanks used in the war.