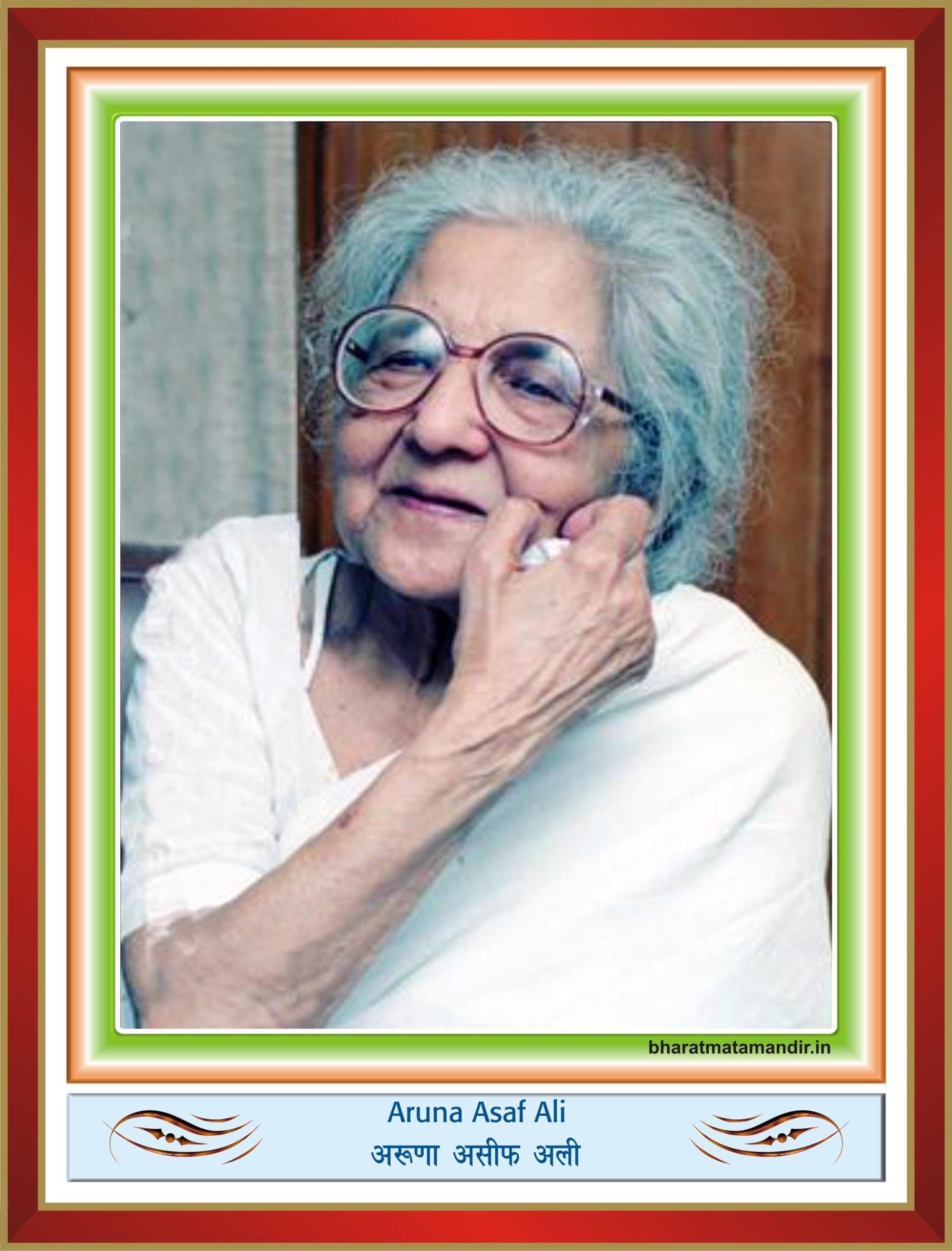 Aruna Asaf Ali (Bengali: অরুণা আসফ আলী) (July 16, 1909, Kalka, Haryana—July 29, 1996) (born Aruna Ganguli), was an Indian independence activist. She is widely remembered for hoisting the Congress flag at the Gowalia Tank maidan in Bombay during the Quit India Movement, 1942. She was 87 years old at the time of her death.

Aruna Ganguly was born at Kalka, British Punjab, but it is now in the state of Haryana into a Bengali Brahmo family. She was educated at Lahore and Nainital. She graduated and worked as a teacher, an achievement in itself for women, given the conditions prevalent in the country at that time. She taught at the Gokhale Memorial School in Calcutta. She met Asaf Ali, a leader in the congress party at Allahabad and married him in 1928, despite parental opposition on grounds of religion (she was a Brahmo while he was a Muslim) and age (a difference of more than 20 years).

She became an active member of Congress Party after marriage and participated in public processions during the Salt Satyagraha. She was arrested on the charge that she was a vagrant and hence not released in 1931 under the Gandhi-Irwin Pact which stipulated release of all political prisoners. Other women co-prisoners refused to leave the premises unless she was also released and gave in only after Mahatma Gandhi intervened. A public agitation secured her release.

In 1932, she was held prisoner at the Tihar Jail where she protested the indifferent treatment of political prisoners by launching a hunger strike. Her efforts resulted in an improvement of conditions in the Tihar Jail but she was moved to Ambala and was subjected to solitary confinement. She was politically not very active after her release.

Her father Upendranath Ganguly hailed from Barisal district of Eastern Bengal but settled in the United Province. He was a restaurant owner and a very adventurous man. Mother Ambalika Devi was the daughter of Trailokyanath Sanyal,a renowned Brahmo leader who wrote many beautiful brahmo hyms. Upendranath Ganguly’s younger brother Dhirendranath Ganguly (D G) was one of the earliest film directors. Another brother Nagendranath, a soil biologist was married to Rabindranath Tagore’s only surviving daughter Mira Devi though they got separated after sometime. Her sister, Purnima Banerjee was a member of the Constituent Assembly of India.

On August 8, 1942, the AICC passed the Quit India resolution at the Bombay session. The government responded by arresting the major leaders and all members of the Congress Working Committee and thus tried to pre-empt the movement from success. A young Aruna Asaf Ali presided over the remainder of the session on 9 August and hoisted the Congress flag at the Gowalia Tank maidan. This marked the commencement of the movement. The police fired upon the assembly at the session. Aruna was dubbed the Heroine of the 1942 movement for her bravery in the face of danger and was called Grand Old Lady of the Independence movement in her later years. Despite absence of direct leadership, spontaneous protests and demonstrations were held all over the country, as an expression of desire of India’s youth to achieve independence.

An arrest warrant was issued in her name but she went underground to evade the arrest. Her property was seized and sold. In the meanwhile, she also edited Inquilab, a monthly magazine of the Congress Party, along with Ram Manohar Lohia. In a 1944 issue, she exhorted youth to action by asking them to forget futile discussions about violence and non-violence and join the revolution. Leaders such as Jayaprakash Narayan and Aruna Asaf Ali were described as “the Political children of Gandhi but recent students of Karl Marx.” The government announced a reward of Rs. 5,000/- for her capture. She fell ill and Mahatma Gandhi sent her a hand-written note to her to come out of hiding and surrender herself – as her mission was accomplished and as she could utilize the reward amount for the Harijan cause. However, she came out of hiding only after the warrant against her was withdrawn in 1946. She treasured the note from the Mahatma and it adorned her drawing room. However, she also faced criticism from Gandhi for her support of the RIN Mutiny, a movement she saw as the single greatest unifying factor of Hindus and Muslims at a time that was the peak of the movement for Pakistan.

She was a member of the Congress Socialist Party, a caucus within the Congress Party for activists with socialist leanings. Disillusioned with the progress of Congress party on socialism she joined a new party, Socialist Party in 1948. She however left that party along with Edatata Narayanan and they visited Moscow along with Rajani Palme Dutt. Both of them joined the CPI before Stalin’s death. On domestic front, she was bereaved when Asaf Ali died in 1953.

In 1954, she helped form the National Federation of Indian Women, the women’s wing of CPI but left the party in 1956 following Khruschev’s disowning of Stalin. In 1958, she was elected the first Mayor of Delhi.

She and Narayanan started Link publishing house and published a daily, Patriot and a weekly, Link the same year. The publications became prestigious due to patronage of leaders such as Nehru, Krishna Menon and Biju Patnaik.Later she moved out of the publishing house due to internal politics, stunned by greed taking over the creed of her comrades. In 1964, she rejoined the Congress Party but stopped taking part in active politics. Despite reservations about the emergency, she remained close to Indira Gandhi and Rajiv Gandhi.